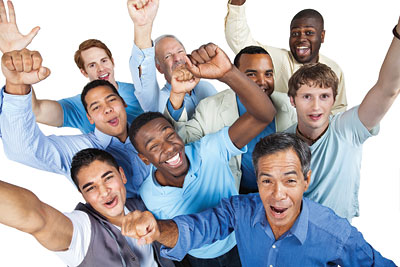 My first memory of being different from boys is from when I was around nine years old. We were at our cousin’s house, a bunch of us from my mom’s side of the family. The boys were playing outside, some older than me, some about my age, some younger. Seven or eight boys, I suppose.

I was playing inside. The girls were inside. My grandma asked, “Greg, why aren’t you outside playing with the boys?” I heard, “You need to go outside and play with the boys.” Outside I went. I saw that my behavior had been wrong. I learned to conform.

I grew used to the boys. In our neighborhood, I played with all of them in lots of baseball and football and basketball. I loved team sports.

I observed the boys. As long as they were playing nicely with each other, they didn’t feel like foreigners. I’m not saying that I never misbehaved—thankfully, my mom isn’t alive to give you a litany of my sins—but when it came to behaviors which were, well, masculine, they struck me wrong.

Trying to fit in, I over-reacted. I would pick fights. I was scrawny. I lost every one of them. Finally, in seventh grade, when an argument during a game of softball, which we were playing in phys ed, arose between Dan Smith and me, and Dan gave me a pummeling, I swore off picking fights.

By high school—when the other boys were going through puberty, which did not come for me until a full one to two years after every other boy—I saw them even more differently. I played football my freshman year, all five-foot-one-inch of me. (I only began growing my junior year, and didn’t stop until I was a year out of high school.) I LOVED football. I did not, however, love the violence of the game, or how football lent itself to macho behavior.

I never once used a regular restroom my four years of high school. I feared the boys whom I might encounter. I would use the locker room bathroom after phys ed class, which I had late mornings all four years, and then hold it the rest of the day.

When, last year, I read some of the attributes of boys with gender identity issues, some things came to me that I’d never recognized. Because I was in awe of and confused by boys, I kept to a very small circle of friends. (When, my junior year, I began working at Todd Pharmacy, my friends mostly became the girls with whom I worked.) Only now do I see that the one good guy pal I would have at a time was the atypical male. Goofy. Fun. Not overly masculine acting. For me, safe.

In my senior year, Tim Todd and I took to each other. Tim was and is the epitome of a gentle man. Certainly, he is also goofy and fun. Tim and I have been best friends ever since.

Other men with whom I grew close over the years, and some with whom I remain close, all fit the same description: gentleman.

When I was a pastor, I sat with around fifty couples in preparation for their marriages. I wanted them as ready as possible for what I came to say is the hardest thing a person will ever do, but also the best thing a person will ever do. I took them through a detailed Bible study on what marriage is, what it is for, the man’s job, and the woman’s task. I explained things in plain and explicit terms.

I also led them through the booklet I wrote on the topic of communication for my senior paper at seminary. I had them read it together, then we got together and talked about key points. This fostered some very enlightening conversation and even surprising revelations—both for them and for me.

With the accumulation of the number of couples I saw, this sense of men being foreign to me grew deeper. My identifying with them was a crater, which grew into a chasm, finally expanding into a canyon—a mighty grand one at that.

Even as I write that and believe it, the more couples with whom I sat, the more I did not understand the men and way too much selfish, jerk behavior, and the more I identified with the women, with what they said, how they felt, their struggles with their fiances.

The same went for married couples who called on me for help. In a couple of cases, I found the wife failing way more than the husband. A few times, they both were terribly guilty. For the rest, frankly, I wanted to kick some sense into the husband. It seemed as if what these men vowed on their wedding day they took as seriously as the average person takes a New Year’s resolution by January 5.

Bringing things to the present, several months ago I noticed myself looking at men as I had never checked them out before. I was examining them. Studying them. Analyzing them.

I simply cannot figure out what motivates so many men. It gets down to everyday things such as “How can they wear that facial hair?” and “I am happy I don’t have to dress like that any more,” to larger scale things, especially behavior which I generally lump into the selfish category: looking out for me, serving my desires, not considering the needs of others.

I have never liked aggressive behavior, “look at me” behavior, “I don’t care” behavior. When I see it in men, I don’t get them. Why are they like that?

Show me some sensitivity. Think about others once in awhile. It’s okay to be vulnerable.

I find myself staring, marveling at these creatures the way children visiting a zoo for the first time get wide-eyed at the sight of running giraffes.

What of the second point, wishing I could be one of them? This stems from my deep-seated longing to never have had to transition. As recently as this month, I was able to say that if someone presented a way for me to successfully live as a male, while I would be scared of it not working I would likely do it.

Yet, the third point speaks to the peace I am enjoying. I don’t hate myself anymore. I feel right as a female. Everything specifically feminine that I now get to do—paint my nails, wear pretty things, get my hair done, and simply behave more female—it all feels correct, good, nice.

From high school, when I found the girls easy to be with and the people with whom I felt comfortable, that sense continually grew in me. It has finally blossomed.

As for men, have I reached that point where I fully fit into the opposite sex—you know, “Men are from Mars, Women are from Venus”—finding that males and females have fundamental psychological differences? It sure seems so.

Now that estrogen predominates in me, I find testosterone-fueled behavior to be other-worldly.

Because I love to find ways to extract humor from situations, I enjoy opportunities when I can express a woman’s exasperated, “Men!” and I do it as if I’ve been doing it my entire life. “Who understands those beasts? I sure don’t. Men!”

Guys, I promise not to overdue it, but please understand: I have a lot of catching up to do.