But don’t ask me the zip code.

I was pretty young when we lived in Hart—second through fifth grade—and still I remember our address and phone number as if they were mine, today.

Dad had been the chief of police in Montague, where he and Mom made their home after marrying, and soon built the house at 4931 Wilcox where I would live all but four years of my young life, but not from second through fifth grade because Dad had a chance to take on a new challenge as city manager, a half-hour north in Hart. 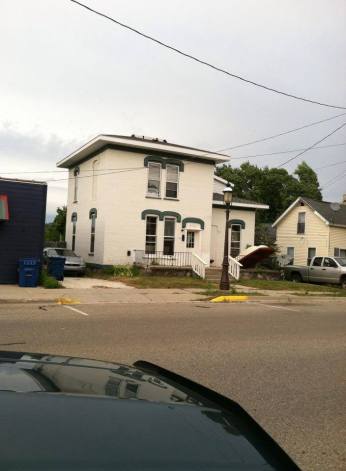 Our house in Hart, as snapped by Rhonda Bogner. The upstairs windows shine into the bedroom which housed all four boys. 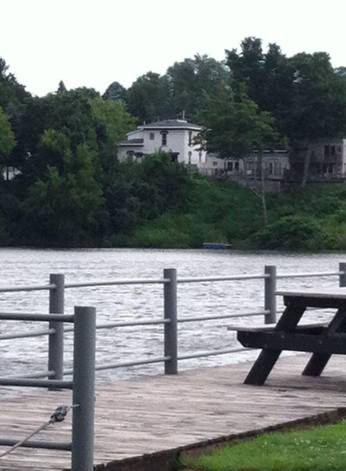 Rhonda also captured our house from the location of the former Harry’s Boats and Bait.

316 E. Main Street was only a block from downtown. Living in Hart from 1964 to 1968, the American downtown was still thriving. I have vivid memories of shopping in Gambles (think of a small version of Walmart), the Rexall drugstore, Hegg’s department store, the five and dime, and Lorenz’s party store. The Hart Theater was where I saw The Sound of Music.

Lorenz’s was on the way that we walked to and from school. When I had a penny, I bought a piece of Bazooka bubble gum. One piece, however, did not produce the size of bubbles I loved to blow.  Being the poor kid that I was, I once plotted to introduce my own buy-one-get-one-free sale: I slipped one into my pocket as I took one to the counter to purchase.

I enjoyed the twice-sized bubbles I could blow until the guilt got to me, which came that night as I lay in bed. I repented. I begged the Lord’s forgiveness. I did that every night for many days. Finally, the budding theologian in me said, “If you believe God has forgiven you, stop asking and trust that you are forgiven.” As a pastor, when teaching the kids the commandment, “You shall not steal,” I always told that story, and they always loved it.

Hart’s downtown was a block to the west. The neighborhood kids were a block to the east. Typical of the ‘60s, there were kids galore, and plenty for every age. On summer days, we could be found everywhere, all day long, just messing around, with nary a mother in sight. Evenings commonly contained games of kick the can, hide and seek, blind man’s bluff, and the like.

Because we lived on Hart Lake, and kids did not have to purchase a fishing license, we spent a lot of time at the lake with pole in hand. For bait—since we were kids with no money—we headed to John Gurney Park where on its edge the city piled leaves, which created our store for worms and night crawlers.

We were not always broke. At times, when she had the money and we had not infuriated her so badly that she once again declared, “I’d leave you kids if I wouldn’t be arrested for desertion,” Mom might give us ten cents. “This is not an allowance,” she always announced. “It’s a gift.” Sure, Mom. Whatever. Just give me the dime so that I can head to the nearest store—the bakery—and either buy ten penny candies or two candy bars.

We also earned our spending money by picking up pop- and beer bottles. In those days, they netted two or three cents. We tried to return them to the places that offered three cents. Before the age of ten, I learned what fifty-percent more looked like.

Dad got to know the owner of Harry’s Boats and Bait, Harry Fatseas, and my folks became good friends with him and his wife, Dorothy. Harry was a Greek and Dorothy was from the Ozarks. What a couple! She was an excellent cook, and laid out tables-full of dishes from both cultures. I favored her pinto beans and corn bread.

We could not afford a boat. Harry had a sunken row boat. He told Dad he could have it. Dad took it. He resurrected it from its three-feet-of-water grave and generously lathered it with tar.  He dubbed her The Mayflower, and we made many a fishing hole pilgrimage in her.

My father was not one to play ball with us kids, but he generously gave his time by taking us fishing, patiently helping us with tangled lines and fish that swallowed the hook, and surely ruining many an outing for himself by looking out for us.

One summer day, when the crappies were running, we kids headed for the bridge that ran between downtown and Harry’s place. There were so many crappies, we pretty much needed only to drop our line and we had yet another fish.

We took buckets home. Too lazy to scale, gut, and filet them, the fish waited for Dad to be done with work. Once again, Dad displayed the patient work ethic which finally blessed me when I grew up. He made quick work of those fish, and we had bags and bags for the freezer from which Mom could fry them into what we delightfully called “potato chips.”

Hart Lake and Gurney Park proved to be wonderful sources of friendships, the longest and best when my folks met a newly-married couple from Chicago, Dean and Gerri Koclanis, who were frequent visitors to Hart, keeping their trailer in Gurney Park, because they loved to fish.

Quicker than you can bait your hook, Dean and Gerri were family friends and our surrogate parents. When, in 1968, we moved back to Montague, they always stayed at our house, heading north on US-31 to Hart when they wanted to fish.  After Mom died in 1986, they resumed camping in Gurney Park.  Until I moved my family away in 1992, for me to attend seminary, my first wife and I took our four kids up to Hart many a Saturday evening, when I could be heard saying, “The questions are not ‘When are we eating?’ or, ‘What are we eating?’ but, ‘How much are we eating?'”

A familiar perch after scaling the dunes. 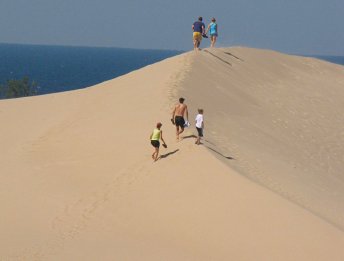 The sand was hot!

Water was always part of my life, growing up on both White- and Hart Lakes, and near Lake Michigan. Another blue body, Silver Lake, with its massive, towering, constantly shifting sand dunes, is a quick fifteen minute drive from Hart. It became a go-to place. The lake is shallow, which means you can walk way out into it before it gets too deep—read that: mothers can keep their noses glued to the latest steamy novel—and it warms up quickly, way faster than Lake Michigan. The dunes are a fun challenge to climb and walk. The dune rides are exciting. And, of course, the ice cream shops are plentiful.

In Hart, neighborhood friends also were plentiful, as were those at school. Two classmates stand out, with whom I have been pleased to be reunited via social media: Rhonda Vanderputte (now Bogner), and Doug Campbell.

If Charlie Brown had been in our class, Rhonda would have been the cute little red-haired girl with whom he was smitten. I was smitten with her, but not because I noticed that she was a cute girl. In those grade school years, she simply was my buddy because she was fun, one of the kids I loved to hang around with.

Doug was a kid that was just like me: goofy. The classic Doug story comes from the day that he was over at our house, and he, my brother, Dave, and I were playing dodgeball in the back yard, and we broke the basement window of the next door neighbor, the Hagens.

Scared to death, we headed into our house. There, Doug rehearsed, over and over, how we would explain the broken window, always beginning, “MIS-ter Hagens,” in ways so serious/silly that Dave and I laughed ourselves into fits.

I believe it was Rhonda who connected us via Facebook. In 2012, Doug paid a visit to two brothers and me at our deer camp the day before the season opened, east of Montague and not too far west of where he lives. Forty-four years apart melted away in a heartbeat over the morning he spent with us.

The next deer season, Rhonda joined Doug and me for lunch. What a fun reunion! The chatter and laughter and reminiscing easily outlasted the burgers and fries and copious cups of coffee. That was 2013, and they didn’t know I was falling apart. Since my transition, both have remained great friends.  Thanks, Rhonda and Doug.

I recall Hart for the final time I ever saw a doctor make a house call—Dr. Barker making the block-and-a-half trek to check on my youngest brother, Mark—and the first time I rode the Tilt-a-Whirl and Scrambler—at the Oceana Country Fair, which Mark has faithfully attended all these years, perhaps in search of Dr. Barker—and the time all three of us “little boys”—that was me, Dave, and Mark—all came down with chicken pox on the first day of Christmas vacation, Dave getting them so bad that he had painful boils—and the only time I ever saw my dad tipsy—he came home from the office Christmas party with a lot of holiday cheer, driving Mom to play the role of Scrooge.

I never thought myself a particularly wise kid, but I recall a sense I acquired after a few years in Hart which now seems it was beyond my years. Hart always felt like a vacation. Everything was good. School was a breeze. Friends and activities were aplenty. My parents made a wonderful home and life for us kids. The only things I feared were our spooky basement and the occasional wrath of my older brother, Tom.

After four years, in 1968, when I was eleven and entering the sixth grade, we moved back to Montague, Dad’s having tired of city politics and now working for the Muskegon County Road Commission. As I grew into my teen years and adulthood, the Hart-years-as-vacation deepened.

Last spring, my best friend, Tim Todd, and I took a drive that led us up to Silver Lake and into Hart. I reveled at pointing out this cool place and that fun spot. We parked right across from our 316 E. Main Street house, in the old Sinclair station. I called my sister, Sue, to tell her where I was.

Once again, I was in that moment the Hart kid—the little boy without a care in the world. 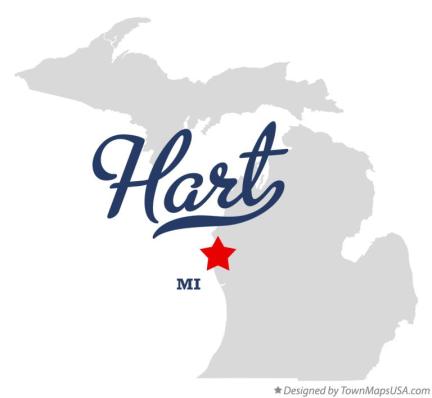