After becoming Lutheran, I easily identified with Martin Luther. As he did, I grew up Roman Catholic. As his life went, I spent my life trying to figure out how to live well enough so as to please God and not be eternally damned to hell. As with him, I was finally set free by learning the Gospel of Jesus Christ.

After nailing to my Facebook wall my theses regarding what it means to be a Christian who is transgender, and experiencing the fallout from that on several Lutheran websites—from fun being made of me (“He’s nothing more than a man in a dress”), to accusations that I wanted to change the church by introducing new ideas (that is, the entire LGBTQ agenda), to being told that I am going to hell—my identifying with Martin Luther increased five hundred fold. 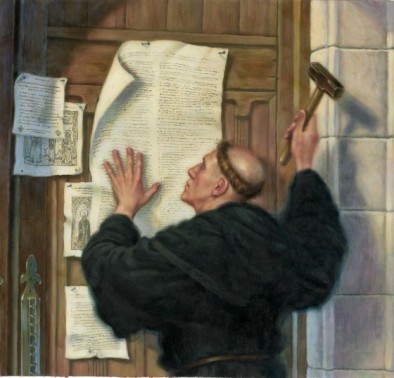 While pondering Luther has been my regular companion these past three years, I am sharing my thoughts now because this October 31, 2017, is the five hundredth anniversary of Luther’s coming out on his Facebook-equivalent wall—the front door of his church—with his arguments against the Church, the ninety-five theses which found him in the spot I would find myself: everything from a joke, to a heretic, to damned.

Martin Luther had many arguments with the Church, with teachings that did not align with Scripture, and with various abuses, notably the selling of indulgences with the promise that these notes moved souls from Purgatory to heaven.

Ultimately, Luther’s fight was for the Gospel, for the purity of the Good News about Jesus Christ. Non-biblical teachings—such as Purgatory, praying to saints, the merits of Mary, making satisfaction for sins—had obscured the finished work of Jesus Christ for the forgiveness of sins, and the granting of eternal life to the believer, and the assurance of salvation because of Christ’s work.

The Church was outraged by Luther. He was viewed as nothing but trouble. Discussion after argument after defending his teachings left Luther with a bounty on his head and excommunicated from the Church.

Luther never wanted to leave the Church. He did not want to start a new one. He loved the Church and, because he loved it, he longed for it to correct its errors. Luther longed to be heard, not to be misunderstood, for his opponents to be able to see and admit to the errors he had rightly recognized. He used Scripture as the basis of his doctrine, and any Church teaching or doctrine which did not align with Scripture was rejected.

The Church, with the pope as head, said that it had authority along with Scripture; when the pope spoke, it was as good as what Paul and Peter had written. Indeed, the pope, they have long taught and still do, sits in Peter’s seat. You don’t tell the pope that he’s wrong.

That’s exactly what Luther did.

And he was really good at it.

The pope wanted his head.

Before it got to that point, Luther got to make a defense of his teachings. The image one conjures is of him standing before a council, behind a table, his books stacked high. The council put him on the spot: recant your errors and you can go home and all will be well. Luther finally replied, “I cannot go against Scripture and conscience.” 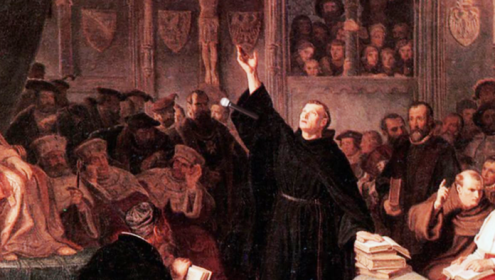 His response was perfect. It has been my wisdom ever since I learned it, and especially these past three years.

Luther never wanted to be a trouble maker, and neither did I. I am confident that Luther spent many hours trying to figure out another way than to take his ninety-five arguments and post them for the attention of all and the consternation of many. Surely, Luther had many friends and peers who urged him to back off, to chill out, to come to his senses.

But nothing he argued was against God’s Word, and because he was convinced about the seriousness of these matters he could not go against his conscience. If he had backed down, he would not have been able to live with himself. He would have felt like he was a chicken, nothing more than a punk monk. His conscience would have pricked at him, poked and prodded him. He would have no peace.

As I have more intimately identified with Martin Luther, I have homed in on the purity of the Gospel. I find a correct understanding of the Good News of Jesus Christ to be foundational to my fellow Lutherans (and all Christians) in grasping everything I am trying to teach about intersex conditions, gender dysphoria, living as a transgender Christian, and how the Christian Church should treat us.

Sadly, I too often feel as Luther surely did, that many will never hear, that my claims are too outrageous, that people have turf to protect, that fear—especially in the realm of all things sex and gender—easily wins the day for a multitude. As I have continued in God’s Word, constantly applying it to what I have learned about my confounding malady, I have worked to do everything in a God-pleasing manner, with a Christian conscience.

As with Luther, I am convinced by both Scripture and conscience that my cause is right, and that if I did not speak I would not be able to live with myself, that my conscience would only prick and poke and prod me into submission.

I never wanted to be an outrage to my Missouri Synod Lutherans, or to any Christians. I do not enjoy troubling people. It’s no fun being sneered at as a kook, a freak, a terrible sinner.

The Lord Jesus regularly ate with kooks and freaks and terrible sinners. He had compassion upon them. Ultimately, He laid down His life for them. No charge. No questions asked. “While we were still sinners, Christ died for us (Romans 5:8).”

“God did not send His Son into the world to condemn the world, but that the world might be saved through Him (John 3:17).”

“God was reconciling the world to Himself in Christ, not counting men’s sins against them (2 Corinthians 5:19).”

“God so loved the world that He gave His one and only Son, that whoever believes in Him shall not perish, but have everlasting life (John 3:16).”

“Therefore, there is now no condemnation for those who are in Christ Jesus (Romans 8:1).”

For it is by grace you have been saved, through faith—and this is not from yourselves, it is the gift of God— not by works, so that no one can boast (Ephesians 2:8-9).”

In the end, what will save me from my impending death? Will it be my personal purity? That I’ve done enough good works to stave off God’s wrath? That I finally get my head screwed on straight and repent that I caved in to my gender dysphoria and transitioned? Nope, nope, and nope.

“All have sinned and fall short of the glory of God, and all are justified freely by His grace through the redemption that came by Christ Jesus. God presented Christ as a sacrifice of atonement, through the shedding of His blood—to be received by faith (Romans 3:23-25).”

“Christ Jesus came into the world to save sinners—of whom I am the worst (1 Timothy 1:15).”

I am placing my eternal life on the Lord’s telling me the truth. I am counting on Christ’s proclamation from the cross: “It is finished.” I am trusting in the pure Good News about Jesus Christ.

That’s what Christians do, setting everything else aside and “fixing our eyes on Jesus, the author and perfecter of our faith, who for the joy that was set before Him endured the cross, scorning its shame, and sat down at the right hand of the throne of God (Hebrews 12:2).”

That’s what Martin Luther fought for: Christ alone, given by grace alone, received through faith alone, taken from Scripture alone.

I cannot go against Scripture or my conscience. Every night, after I recite the Apostles’ Creed and Martin Luther’s evening prayer*, I close my eyes with a clear conscience and go to sleep in peace, thankful that Jesus loves us sinners.

*I thank You, my heavenly Father, through Jesus Christ, Your dear Son, that You have graciously kept me this day; and I pray that You would forgive me all my sins where I have done wrong, and graciously keep me this night. For into Your hands I commend myself, my body and soul, and all things. Let Your holy angel be with me, that the evil foe may have no power over me. Amen.

4 thoughts on “Martin Luther, the Gospel, and I”