Until 2013, I was not aware of the significant differences in the structures of male and female faces. Thus, since my surgery, I should not be surprised how many times I have heard, “I never noticed this!”

Because of the difference, it is not as simple as a genetic male, who is transitioning to female, to grow hair, and to trim eyebrows and apply makeup, so as to completely achieve a female appearance. This is why, on November 22, I underwent facial feminization surgery, which is commonly known as FFS.

In this post, I unfurrow my brow. In the coming days I will pucker my lips, then stick out my neck, and then finally reveal my entire face.

Thanks to Dr. Eppley for taking all of the appropriate photographs. In the process, I learned that he is an active blogger. If you would like to read the expert’s rendition of his surgery on my brow, click the following link. Be prepared for several pictures of my actual surgery, with my forehead exposed. To me, they are pretty gruesome photos, so be forewarned if that kind of thing creeps you out.

I present my lay-person’s version of what Dr. Eppley professionally wrote. As he refers to it, my male brow provided a Neanderthal Man look. Though male brows of today are not quite so jutting as the Neanderthals, that is a handy reference as everyone immediately has an image to conjure.

I had viewed loads of photos in anticipation of my surgery. I am pleased to report that these photos show exactly what I was hoping would be achieved.

Female brows are smooth, and don’t jut out.  See the difference in the photo at the opening of this post, the side view providing the most vivid angle to see the difference.

Female eyebrows are set higher on the face. If you had not known these two things—the jut versus smooth, and the lower-set versus higher-set—pay attention. Look—but don’t stare!—at men and women. Now that you know the difference, you will see the difference. This quickly explains why we have such things as masculine and feminine appearances.  We’re simply built differently.

These pictures fascinate me.  I see the same person, yet I see a dramatic difference.  With age, my brows were sagging.  Now lifted, my eyes look more alive.  And a bit more youthful?  Perhaps.

Dr. Eppley used a reciprocating saw to reduce my brow bone. He then performed a brow lift. Combine this with a scalp advancement—he was hoping to move my scalp forward about a centimeter, close to 4/10″—the other gain for me was both a less-prominent forehead and the removal of the wrinkles of aging.

Shaving the bone created a hole in my head.  (As if I need another hole in my head.) When he visited Julie and me the day after surgery, he warned me not to blow my nose for the next couple of weeks as the surgery healed, and if I were to sneeze to place the palm of one hand firmly over my forehead. If I were not to do that, I would feel a rush of air, and it would be very uncomfortable. 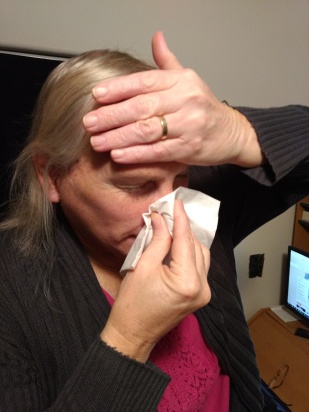 Worry not, I sneezed. And I blew my nose a few times, forgetting to palm my forehead. I learned the hard way: I was officially an airhead.

What is the feeling of air rushing into one’s forehead? It didn’t so much hurt as it was just plain weird. The air seemed to rattle about for several seconds, like a pinball bouncing around the machine.

Two weeks after surgery, I was finally able to trust blowing my nose, palming my forehead, so that I didn’t experience the big rush. It got to where I felt about a dime-sized spot, between and just above my eyebrows, giving just a bit of a harmless puff with each blow.

As I am nearing the three week mark post-op, I am still palming my head, but I am no longer feeling even the dime-sized spot. Soon, I will have confidence to go all out, trusting that what Dr. Eppley had pulled back in order to shave my bone has now re-adhered itself.

My brow now completed, next time I will give you some lip.