Every bit as clear as the contrast between the brows of males and females is the difference in our lips. In most cases, especially with Caucasians, females are lavished with larger lips and males sport smaller ones. (If this is not true for you, always remember that, as with a car’s miles-per-gallon, your genetics may vary.)

As Dr. Eppley put it when assessing my face, “Your lips are pencil thin.” He was right, and so my lips were in play as an important aspect of my facial feminization.

While there are several ways to enhance one’s lips, Dr. Eppley quickly dismissed fillers and injections for me as they would leave me not with top-to-bottom larger lips, but with them puffed up and perhaps unnatural looking. 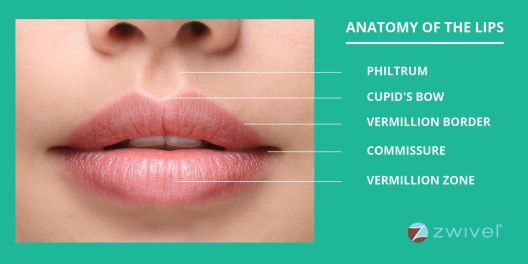 Leading into the method he had in mind, Dr. Eppley said, “Vermilion is stretchy.” While this did not sound particularly surprising, who thinks about how stretchy are the lips? Even more, at what was he getting? He was interested in removing a small amount of skin from around the vermilion border, then reattaching my lips, making good use of their stretchiness and achieving the desired goal: I would have larger, feminine-looking lips.

Two things immediately presented themselves to me. First, how would we decide how far to go? Second—and for a short time of greater concern—how much would this hurt? I could easily imagine that the early days of recovery would be no-fun nasty.

Before I get to that, how does one decide how much increase would work well? I drew on my face. I began with a red lip pencil. After a couple of attempts, I had drawn on a respectable outline. I then filled in with lipstick.

My lips looked pretty good. I measured them. I had added about 1/8″ all around. I showed Julie. We were in agreement that this is what I would tell Dr. Eppley, and see what his idea would be.

He agreed, though he translated it to three millimeters, which is a hair under my measurement.

You can bet your tube of Chapstick that I asked how painful this would be, and whether it would affect my eating as I recovered. I don’t fault Dr. Eppley for giving me a pretty brief and simple answer, as I am now a veteran of four significant surgeries and I have found all of my surgeons not to have gone into depth as to the troubles of recovery.

Besides, how would they do that? Patient: “Doctor, how bad will I hurt?” Doctor: “Let me put it this way: I hope I never have done to me what I’m going to do to you.” Yikes.

I always go into surgery the way that I try exotic foods for the first time. With food, I figure that folks of other cultures wouldn’t eat it if it tasted terrible. (The lone exception so far? Vegemite. You Australians must have some wacky taste buds.) So I reckon with surgery; they wouldn’t do the surgery—especially elective surgery, as my three 2017 ones have been—if it had in store a near-impossible-to-endure recovery period.

Where my brow made the early days of recovery problematic because of the new hole in my head (see yesterday’s post), the first week after surgery on my lips made eating and drinking nightmarish chores.

My lips were numb. The stitch line hurt. On Black Friday, two days after surgery, with Julie back at work, in the mid-morning I was hungry and could not think of anything to eat that I would be able to eat. I couldn’t feel a fork on my lips, and moving them was painful.

An idea struck. I headed to the kitchen. I took out the milk, eggs, and sugar. I have now made homemade eggnog enough to recall the portions of each ingredient. I didn’t have heavy cream, so this would not be as tasty as usual, but it would do the job that I needed. It would be easy to drink through a straw, taste yummy, and provide me with the calories I needed.

It worked. I am now preparing a marketing plan for the Post-op Eggnog Diet. (Don’t be so quick to dismiss my genius!)

The day after surgery, Dr. Eppley revealed a bit of news which I sure did not want to hear. He had not used dissolving stitches in my lips. The stitches would have to come out. One day, during one of the two times a day I applied antibiotic cream to them, I counted the stitches. Their were more than forty. Ugh.

I had somehow made it to age sixty without ever having experienced stitch removal. As I asked folks, everyone said, “It feels like a tug, but it doesn’t really hurt.” Then, some added, “But I don’t know about around your lips.”

They sure didn’t know about around the lips. Many of them qualified as the tug, very similar to the zap of the more-than-one-hundred-hours of electrolysis I’ve had done on my facial hair. The rest? They hurt. A lot. A few left me out of breath and Dr. Eppley feeling badly for causing me so much pain.

Before completing the first week post-op, I could again feel a fork on my lips and drink from a cup. As I write this nearing the three week mark post-op, the stitch line feels tight. While I have full movement, when I laugh or smile widely the tightness is very evident. Dr. Eppley said it helps the healing to stretch my lips, so have at the laughing and smiling.

There is a red line where my lips were reattached. It makes my lips look a bit odd for now. It will take awhile to fade away.

Dr. Eppley has blogged about my lip procedure.  Sorry, to you who like surgery pictures; unlike with my brow there are no during-surgery photos this time.

Thankfully, I can envision the finished product. Especially when I smile, I find my lips to be what I had wanted. However, only looking at my lips does not provide context. For that—to see how my brow and lips look together—I stick my neck out asking for one more day of your patience. Before I reveal my entire face, I have a face lift to display and discuss.