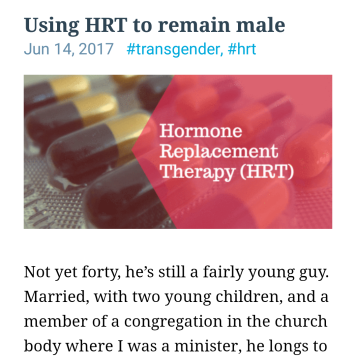 He didn’t have cancer. Or any other health issue. The breast tissue was healthy. But it had to go.

It was too much for Robert (not his real name) to succeed at living as a male, to have these now too large breasts, which, ironically, grew so large because he was doing everything he could do to remain a male.

I wrote about Robert in Using HRT to remain male.

In 2016, Robert contacted me, having found my blog. He suffered gender dysphoria. Married, with young children, and a Christian of the Lutheran Church—Missouri Synod  (my former church body), he found that he simply could not transition to female.

He called this desire to be a female “the alluring call of femininity.” Down deep, he wanted to answer the call. But, he knew, as with the siren song of Greek mythology, answering the call would only dash his entire life upon the rocks of being transgender—the rocks upon which so many trans folks have been unfairly crushed.

He had learned of a man, who had gone on hormone replacement therapy (HRT), which people take for the purpose of transitioning, but this man was using it to alter his hormone levels so as to remove, or at least lessen, his gender dysphoria. It was working for the man, so Robert went on HRT.

The idea is that hormone levels, which are typical for a male, are out of whack for some men. So, perhaps, if a guy doesn’t have so much testosterone coursing through his body, and, perhaps, a bit more estrogen, he would feel better. I call it “the sweet spot.”

Robert texts me every few months. This is what he has described, in and out of the sweet spot But, he continually informs me, he’s succeeding in silencing the alluring call of femininity.

Of course, he knew his breasts were going to grow. The other effects of lowering his testosterone and raising his estrogen—softer skin, some fat deposits shifting, body hair becoming more sparse (it’s different for everyone; as the saying goes: your mileage may vary)—likely would never be noticed. But, growing breasts? Those are hard to hide. Of this, I know.

As trans men do, who have not had top surgery, he bound his chest. This works to hide the breasts, but it is tremendously uncomfortable, and even dangerous if the breasts are bound too tightly, and for too long. Robert reported that at times he almost couldn’t breathe. And, of course, the larger the breasts grow, the tighter the binding needs to be.

For Robert, it had to stop. He talked to his doctor about having his breasts removed.

Softly, the sirens sang. They called to Robert, “If you have your breasts removed, it will be that much harder to transition should you ever decide to.” This is my translation of how Robert put it, that there was this little part of him which was mourning the thought of surgically removing his breasts.

He moved forward. He set the date. Two weeks ago, he had a double mastectomy.

Last week, he told me that he is healing well. The surgeon is pleased with the outcome. Robert would be back to work by the time I posted this.

As one who longs to have his breasts removed (this post isn’t about me, so more on that another time), I can easily imagine that Robert now dresses for work and moves about in the world with renewed ease. No more painful binding. No more wondering if people are noticing his chest. Looking like the regular guy he longs to be.

The Lord be with you, my friend, that you are able to continue, to be strong, to steer clear of the rocks on which the sirens would dash you.

For those who are able to transition and it works for them—which means it also works for their family, and for every situation it affects—I am pleased with them, that they have found health and wholeness. For those who do not want to transition or feel they cannot, I am pleased with them when, as with Robert, they can find a way to health and wholeness in their birth sex.

Thank you, Robert, for sharing your story with me, that I might share it with others, that others might be served in their battle with this cursed gender dysphoria.

2 thoughts on “Robert had a double mastectomy”