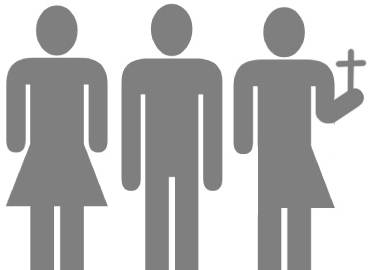 Last week, I received an email from the family member of some folks for whom I was pastor. I barely met this man, so I was all the more pleased that he wrote, and in a respectful manner and with a genuine interest in learning.

Other than removing references to his family, I have copied in full his letter and my response. His portion follows in italics, with my replies in regular type.

Gina, I have many questions about your transition. I have followed your blog for a while and decided it was time to contact you! I come to you not to rebuke you or your transition, but to understand it better as I look to solidify my beliefs on the relationship between transgender people and the church. Your story has intrigued me and I knew I needed to be in contact with you.

One of the many things I don’t know much about (and seek to learn more about) is transgenderism. I cannot personally identify with it. Further, I have not understood the relationship between transgenderism and the church. I believe being transgender is a result of the Fall, just as having lustful desires, stealing, etc. God created us all in his image and our unique characteristics are to be used to further the Kingdom. Similarly, I do not believe that being gay is a sin in itself, however acting upon it is. This is where I get a bit confused as, with many other subjects, the Bible does not explicitly address transgenderism whereas it does homosexuality.

I like that you said that you cannot personally identify with being transgender. This is an important point. Anyone, who has not experienced the disconnect between mind/gender and body/sex, cannot know what this is like. My Julie has said, “I wish I could spend one day in your brain, so that I could know.”

Yes, being transgender is a result of the Fall, though I would take care in how you proceeded, using lust and stealing as correlatives. When one does that, it labels being trans as a sinful desire and nothing more. It is better to say that the root cause of being transgender is akin to any malady of our body, whether an illness, a disease, or a condition. I generally call it a condition or a malady.

You are correct in that transgender is not directly covered by Scripture. So, how do I use Scripture to guide me? Before I learned of the many factors which can create intersex conditions, which led me to believe that I have one—a disruption to my endocrine system when I was in the womb which left my hormones out of whack for a genetic male—I thought I only had a sinful proclivity—as with lusting or wanting to steal—and treated it as such, with ongoing repentance. As I grew worse, even becoming suicidal and fearing I was going to go insane, and Julie and I got deep into learning about this (in 2013, the year before I retired), and learned of its physical nature, and came to understand that I have an intersex condition, I was able to proceed with addressing it medically (though I continued to work to remain living as a male, fighting back and forth for two more years), as any person would seek treatment for a malady which has made them ill.

I get it: transitioning from male to female is way more, even crazy sounding, compared with having a tumor removed, or having heart bypass surgery, or taking medicine to control one’s thyroid. This is extreme. Well, that’s the nature of the mismatch of brain and body, of having one’s endocrine system messed up so badly.

You can find in many of my blog posts, where I have said how I keep the two great commandments ever before me, that I strive to live my life loving the Lord with all my heart and soul and strength, and my neighbor as myself. That is one reason I blog, to educate about all of this, and so that my fellow Christians can see that I continue to hold biblical doctrine and practice, and work to deal with my situation in a God-pleasing and neighbor-edifying manner.

I understand your situation to be more complex than a simple desire to be female. It is a desire so core to yourself that remaining male would have been too detrimental to your well-being. From my perspective, I find this to be an issue of identity. Colossians 3:1-3 comes to mind. From the blog I gathered that you view your specific situation as curable, which I empathize with. If you feel that transitioning can help you proclaim Jesus’ name to the nations more resoundingly, then perhaps it is a positive to do so! However, being told we are made in God’s image, how then are we to justify transitioning? Is living as the opposite gender of the one we desire not a burden we must overcome?

Indeed, this is way more than a simple desire to be female. It’s funny how, all of my life, I told myself, “All I want is to be a girl,” and then when the gender dysphoria crushed me and it became apparent that I had to try transitioning to see if it helped, and when it did help my mantra became. “Oh, how I wish I could find a way to be a male.”

I have had folks quote Colossians 3, and many similar passages, to get me to see the light and repent. In return, I ask if they would use the same passages on those seeking a cure for their cancer, that they not accuse them of being too concerned about their earthly life. No, of course, they don’t find anyone like that guilty of being too stuck to this life.

Others have accused me of being worldly. To them, I ask about Christians who get tattoos, and who get deeply into all sorts of worldly things. At what point are they doing so in a godly manner, and at what point might they be sinning? They accuse me of being worldly, because they only see transgender as the T in LGBT, or they have an image of trans people which has been honed by movie and media portrayals, and they have stuck in their heads “male and female He created them” and go deaf when I appeal to intersex conditions, and to their being worthy of treatment just as is any physical malady.

Yes, we have been made in God’s image, and we live with Adam’s image, the result of the Fall. So, I justify transitioning as I’ve written, treating my condition as a physical malady and working to be healthy so that I am able to fulfill the two great commandments.

Here’s the thing: I had grown so ill that I often was not able to fulfill the two great commands. I was angry, I was sullen, I wanted to die, my brain felt like it was on fire. I had two people inside of me, both fighting to win me over. I got to the point where I had to create what I called “the objective G” to referee between Greg and Gina, as the two sparred. No, I never became a split personality (though I wondered if that might happen), but as I experienced Greg stronger than Gina he would fight to rid me of her, and when Gina was stronger she wanted to destroy Greg.

I bawled. I pounded my fists into the floor. I cried out to the Lord for help, for direction. Ultimately, as I worked through therapy and addressed my issues, transitioning ended up providing me relief. And—this is important—when I went on hormone replacement therapy and it provided me relief (which transwomen always say), calming my brain and easing my pain, I grew in my understanding that I have a physical condition, not simply a sinful desire.

To your final question, in what manner do you suggest overcoming this burden without transitioning? This is a discussion I had with nearly ten LCMS pastors before I did so. Guess what answer I received from every single one of them? “I don’t know.”

How does one deal with “I don’t know”? One does what he feels he needs to do. Even LCMS leaders recognize that talk therapy does not solve the problem—and I worked hard, for two years, for it to do that for me. There are no medicines, and there are no surgeries to ease gender dysphoria in order to remain in one’s birth sex. So, what does one do, when one worsens to the point of being suicidal and fearing insanity?

I found myself so close to insanity that it would either happen, or I would kill myself, or I would go on medication that would have to be in such a heavy dose that I would be left in a stupor. Then, how would I be using my life to glorify the Lord?

There are bigger fish to fry in the world than this topic, but I humbly come to you for answers on how best to share the Gospel with those who have this longing to transition or for those who have transitioned.

How best to share the Gospel is not to shut out the likes of me, don’t automatically cast judgment and be hardhearted toward us. We long for compassion, to have the Church work to understand us. We don’t want to be transgender. We didn’t ask for this. We are only trying to be healthy and whole and to live in peace and joy, with God-pleasing lives.

Finally, we long for our fellow Christians to recognize that we all are equal in the Lord’s sight: outside of Christ, equally worthy of damnation; in Christ, equally cleansed and holy, beloved children of our heavenly Father, and brothers and sisters of every Christian.

I hope I’ve provided good, thorough, helpful replies. I hope to hear back from you, to get your reactions. The Lord be with you!

7 thoughts on “Letter: transgender and the Church”