I had set my goal to be fully transitioned by the time I turned sixty. Over the course of four years, I had done everything to set up 2017 to complete the task in time, having the surgeries I desired.  My birthday is in April, after the eleventh.

When I fudge my stated goal—to have all of my surgeries in the calendar year in which I turned sixty—I can claim to have achieved it.

It was 2013. A few months after I began seeing a therapist that April, I had decided that I would need to attempt transitioning, to see if it would help me feel better. Actually, I was on about my tenth decision to transition, and my mind would remain on the I-will/I-won’t swivel for more than two years.

That January, I had crashed. As I reflect on things, I now see that I was in the process of crashing for a few years, since my very early fifties. My life was like watching a slow motion video of a football running back who is hurling through the air, stretching for the end zone, only to have the enormous linebacker awaiting.

It was five years ago that I finally made contact with that linebacker. I was crushed, crunched, and crashed.

Back to the therapist’s office, that summer I had once again decided I would need to give transitioning a try. Nothing else was working. I was getting worse. Meltdowns were my too-frequent visitors. I cried almost as much as I breathed. If I could have torn off my flesh, I would have.

Having announced my decision, I said to my therapist, “I have a goal. I want to be fully transitioned, with whatever surgeries I will decide to have, by my sixtieth birthday, in April of 2017.”

At the time, I had plenty of time. As I tore off calendar pages, it felt like sand seeping out of the hour glass and through my fingers. Before 2013 was out, I had begun hormone replacement therapy (HRT), and in 2014 I retired. Outside of retiring, everything else was a seesaw, including the HRT which I stopped and started four times. Up and down I went, and with every hard landing came the next crash, more jarring than the others.

While suicidal thoughts regularly came calling, I never was close to trying. What came close, and I truly thought was going to land and stick, was losing my mind, going insane, becoming a blithering idiot of a person who could do no more than sit around, eating and watching television.

That is where I found myself in June of 2015. On April 29, I had gone public online, that I had struggled all my life with my gender identity. I was so hoping that fighting my battle in public, openly writing about it, would strengthen me in my resolve to remain male. I found that while writing was therapeutic, being public about this was no cure. In June, I decided to begin to live full time as a female, to see if it would help. I set July 2 as the date to go all Gina, all of the time.

I was finding relief. Thus, in mid-August, I went public about it. I changed my online presence from Greg to Gina. While I continued to have seesaw-situations, each one was situational A pattern emerged. Every time I took the next step, I subconsciously rebelled against it.

And, every time, not only did I fight through the rebellion, taking the step proved beneficial. I succeeded at living as a female. I legally changed my name on May 2, 2016. I scheduled visits with surgeons. I kept going forward.

In 2017, I had every surgery I planned to have. If surgeries did not take so long to accomplish, I would have made my goal of being fully transitioned by my sixtieth birthday. After I hit sixty, the lone thing I had to do was my face surgery and breast implants. At least, I can say that I got them done during the year that I turned sixty. Yeah, I’ll go with that, reaching my fudged goal.

Since my final surgery, I have been on a high. It is a combination thing. I am both tremendously happy with the surgery and riding the wave of being done. If I had a pizza for every time I have verbally proclaimed a huge, smile-accompanied “Whew!”—well, I’d be continually sauced.

The other thing I find myself saying is, “I am a completely transitioned transsexual.” This boggles my mind. From my middle-school years, when I first learned about transsexuals and was so intrigued by them, to the many years that my regular lament was, “All I want in life is to be a girl,” of all of the daydreams I had where I could not ponder actually transitioning, so foreign to my life was that notion.

And now here I am. I am one of them—a male who is a fully transitioned trans woman.

If I had been selected in high school to be part of some crazy send-a-teenager-to-the-moon program of NASA, and had been the youngest person to lope the lunar landscape, it would not have been any wilder in my imagination than the ground on which I am now walking.

It turns out the man in the moon is transgender. 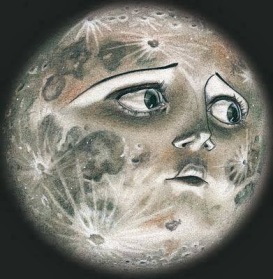